San francisco-based startup ONYX introduced the RCR, aiming to bring back popular mopeds from the 70s and 80s in an electrified way. equipped with an affordable electric drive-train, the tough, fun-to-ride, nostalgic motorbike has been updated with new features that include frames, indicators, controls, brakes, electrical, suspension, and a supercharged new battery and charger. on the technical side, the engine reaches 5.4 kW (7.3 HP) and 182 nm, propelling it up to a maximum speed of 96 km/h with a 3 kWh battery. 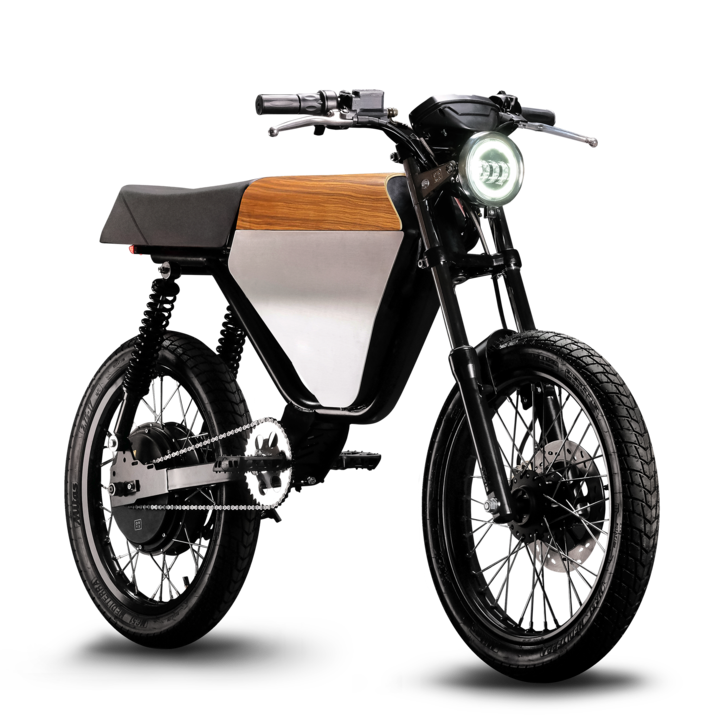 the ONYX RCR has proven to be wildly popular among the electric scooter market, and these updates are just the company’s way of making an already extraordinary product, even better. the new version features passenger peg mounting holes to the swing arm that allow for two people to ride the bike. the caliper bracket is now stronger, cleaner and has been redesigned to give more stopping power. the new swingarm is reinforced to keep the rider steady no matter the terrain while the new frames have a large rubber battery mat that maintains the battery from sliding around even on savage trails.

the updated ONYX RCR is now 3 inches lower, pulling everything closer to the pavement, lowering the center of gravity and changing the handling. the fork has also been updated in order to deliver a smoother ride. finally, the company has released an option to include turn signals on your build with their stock harness. these low profile LED lights look timid but in reality their brightness can leave anyone blind. the set comes with a stock indicator harness, two sets of lights for the front and the back with two different types of custom mounts.

as described by the san francisco-based brand, their vintage motorbikes are where ‘pure adrenaline meets style’. additionally, get ready for better performance, nearly double the range, and real time data thanks to the new ONYX battery management system app.

An electric moped in the truest sense of the word “moped,” the ONYX RCR is a beast of an electric motorbike. 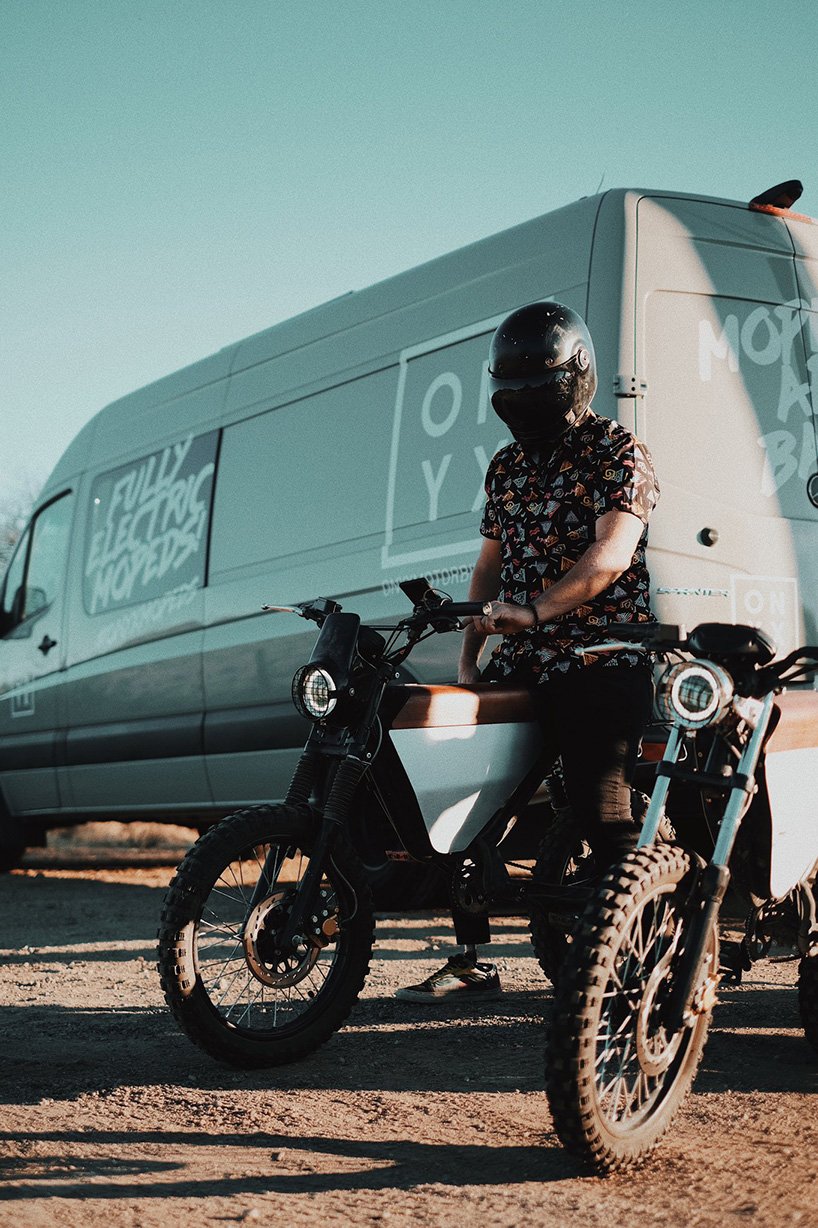 The ONYX RCR is a perfect case of old meets new. It combines that classic moped charm with a powerful and modern electric drivetrain.

Incredibly. Deceptively. Hilariously powerful.
With a twist of the wrist, the ONYX RCR launches you with a force that betrays its small size. I’ve ridden electric motorcycles ranging from 3kW to 80kW of power. And despite the RCR falling on the lowest end of that spectrum, the bike pulls like a much larger motorcycle.

In fact, its spec sheet lists a 200 amp controller. Unless they are sandbagging that controller, 200A at 72V means a peak electrical output of around 14kW or 18hp. In a bike that weighs less than 150 pounds. Yikes!

Have you ever heard of the “e-grin”? It’s a stupidly large smile that people get the first time they try an e-bike and experience the thrill of a silent, electrically powered motorbike.

As something of a professional e-bike rider, I’m on a new model seemingly every week, and it’s been a while since I’ve had a true ear-to-ear e-grin.

The ONYX RCR brought it back in force. I felt this weird, child-like glee as I whizzed off at admittedly dangerous speeds on a vehicle that felt no larger than a standard bicycle, yet rocketed me up to 59 mph. While I never saw the promised 60 mph figure, I got close enough that I can’t complain.

The coolest thing about riding such a powerful, lightweight electric moped is how nimble it is. The strong steel frame and motorcycle-style 17-inch wheels give a strong, rigid feel, while the overall size and wheelbase makes carving up a canyon road effortless.

I was having so much fun that I had to remember to focus on my lines as I entered turns at speeds I would have never even considered attempting on an electric bicycle.

And with sufficiently long travel suspension, off-road riding is a blast, too. James took me down a fire road at speeds that I probably wouldn’t have selected if I had taken point, but that the ONYX RCR ate up like Skittles. The fire road ended in a dirt bowl, and we got the chance to play around with little jumps and hops over the rim, rocks skipping and dust flying.

At the end of the joy ride we headed back on city streets, blending into traffic like we belonged. Which I’m not sure if we actually did, but hell, we were there. Deal with us. 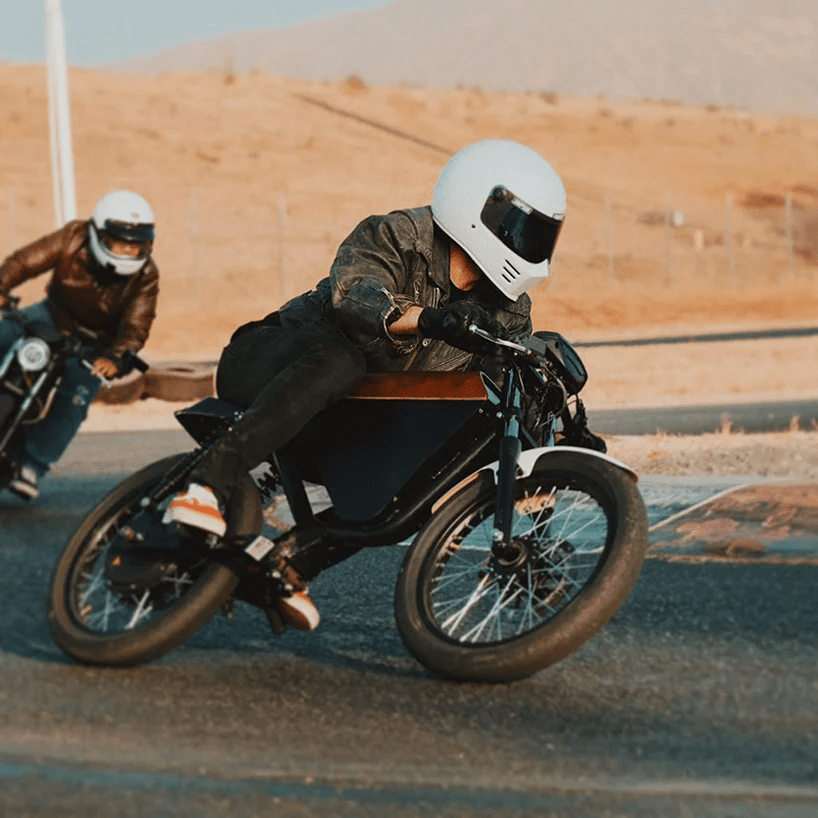 That’s probably the only sticky part about the whole vehicle. It’s a giant legal gray area. On the one hand, it’s an electric bicycle in every way. It’s got two wheels, pedals, handle bars, and an electric motor. But on the other hand, it’s a 60 mph motorcycle with a couple of pedals stuck on it. Sure, the pedals work. But I wouldn’t want to pedal it very far.

Thus, as long as you keep it at electric bicycle speeds (alternatively 20 mph, 28 mph or 30 mph, depending on where you live) and keep it in the 750W power limited mode, it’s theoretically a compliant electric bicycle. But good luck explaining this concept to a police officer on the side of the road while jabbing at a print-out of this page.

At higher speeds, forget about it. With a published top speed of 60 mph, you’re almost certainly in electric motorcycle territory in nearly any US state. And while I have a motorcycle license, I don’t even know how I’d begin to register the RCR at the DMV, since the RCR lacks homologation parts like turn signals, mirrors, etc. There are mounts to add your own mirrors, and ONYX is working on adding turn signals as an optional or standard feature, but they aren’t quite there yet.

So while the specifics of vehicle classification are still a bit of a riddle, there’s no doubt about the ride. The ONYX RCR is a blast and half, offering a motorcycle-level ride with the approachability of an electric bicycle.

If you’d like something with the nice build quality of the ONYX RCR but with a more clear-cut road to legality, you might want to check out the ONYX CTY. It’s a step-through electric moped with similar DNA to the RCR, but the company uses a lower power drivetrain that helps it top out at 30 mph. It was initially offered when the company first launched, but demand for the RCR was much greater, causing the company to put the CTY on the back burner after delivering the few initial pre-orders. I got to ride one, and it was still a blast, albeit a bit slower of a blast. And James assured me that ONYX plans to bring it back, just as soon as they are sure that their heads are staying above water after drowning in demand for the RCR.

As much fun as the ONYX RCR is to ride, it isn’t perfect. The team should be commended for such a great moped on their first try, but the design can still be improved.

The center of gravity is a bit high with the battery carrier mounted in a typical “top tank” format. And the battery cover is a bit annoying to remove and put back on, requiring some persuasion, a lit bit of massaging and a tad bit of luck each time you pull it off and put it back on. Since most riders will store the RCR in a garage, though, you likely won’t need to remove the battery often.

I had expected to complain about the rear brake. The front gets a beefy hydraulic disc brake caliper while the rear has a dinky little bicycle-style disc brake. However, James explained to me that 80% of the rear braking comes from the powerful regenerative braking, with the little disc brake just there to help lock up the wheel if necessary. Plus, we all know that most of your braking comes from the front end anyways, and I never wanted for more braking power in all of the riding we did.

Lastly, believe it or not, these aren’t just imported e-bikes. ONYX actually has not one but two US production lines running in California. The company’s San Francisco factory has been up and running for a while now, and the huge demand has led ONYX to open a second factory in LA that is just now coming online.

Even though most e-bikes in the US are built in Asia, I can confirm that ONYX actually builds theirs in the US. They’ve got people in their US factories turning wrenches and plugging connectors. They laugh. They answer questions if you pester them while they work. They even let you shove a camera in their faces.

In summary, I am absolutely kicking myself for not pre-ordering from the Indiegogo campaign two years ago, when the RCR was priced at $2,299. Now you’ll have to fork over $3,899 for one, but I’d still say it’s worth it.